I have slowly been working away on the Toy House. I kept thinking, I really didn't have much to show & share and then... 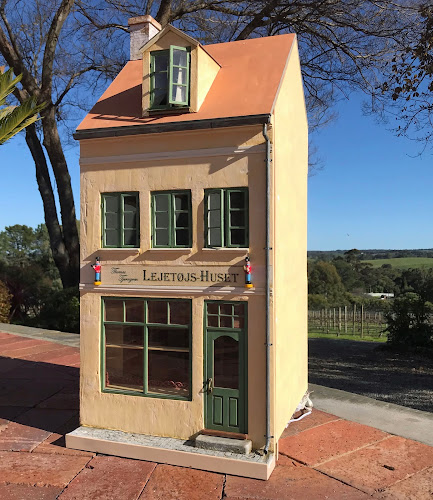 ... all of a sudden, the exterior is (almost) finished - from a plain sheet of plywood, I have built a house.
Now, the idea for this blog was to have somewhere to make 'note-to-self' to record how I got there, but looking at it now, I realize, I probably should have written a bit more along the way. Never mind, here is goes:
After I had stacked the three room boxes it was finally time to get to work on the exterior. The house front was going to be hinged and the roof (for now) lifts off completely. so I figured it would be easier to do as much of the finishing as I could before attaching the front.
First up, my handy husband helped me cut the holes for windows and door. I taped off the openings from the inside, so the render would go a little bit up over the window and door frames.

I then 'rendered the front and the sides of the house shell with powder filler mixed with 2/3 water and 1/3 pva glue. I had learned from rendering the attic walls that the powder filler when only mixed with water, was quite fragile and porous and I don't want to the outside of the house to chip or flake. By adding the glue, the render is now much more hard wearing. I deliberately didn't smooth the render too perfectly - remember this is a very, very old little house!
The outside is painted with satin acrylic paint. It was way too 'perfect and too shiny so I have it a few washes of cream chalk paint over the top. Again, I have tried to deliberately make the paint a little uneven to look older and a bit weathered. 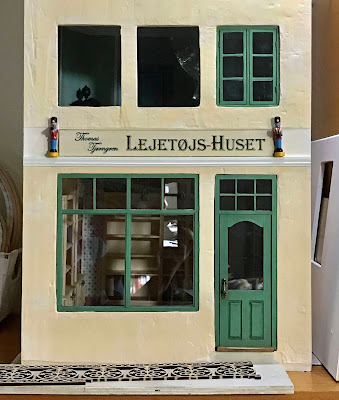 I had not rendered the area behind the shop sign. I painted that section a slightly lighter shade of the wall colour and added a timber moulding (upside-down skirting) for the detail below. That also gives the wee soldiers at each side of the shop sign something to stand on :-)
I am no good at painting, so I printed the sign onto watercolour paper (I like the texture). I then carefully went over the lettering with paint and a fine gold pen before giving the sign a very light sand and carefully 'aged' it with the tiniest bit of very weak tea.
I had made all windows and adapted this door ages ago and had them painted and stashed away in a box, waiting to be popped into place. All the windows are made from strips of card stock with balsa wood frames. Back then, I wasn't taking picture, sorry.
I had removed the original door frame so that I could add a fanlight above and by doing so, make it the same height as the shop window. 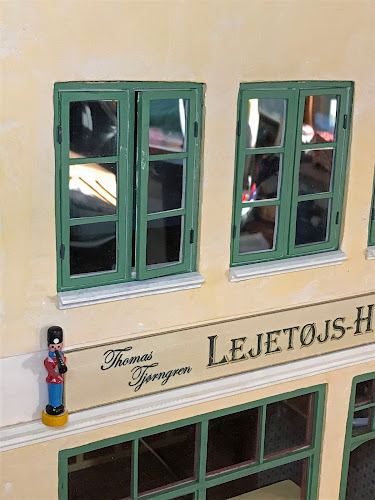 The windows for the apartment and loft are all hinged, using This Tutorial for paper hinges by Aurelea Krieger. To make them a little stronger, I mixed the paint with pva glue and gave them a very generous coating. They are still not made for constant opening and closing, but the glue certainly makes them a little more durable. 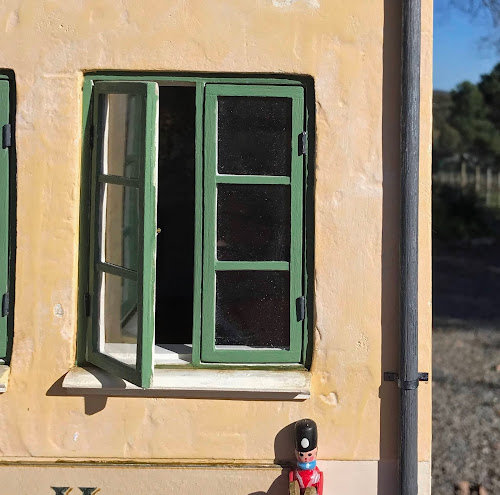 You will notice the windows open out which is most common in Denmark. I have added little knobs (pins) on the inside but I must confess, I stopped short of adding hooks and latches to keep them closed. Maybe next time... 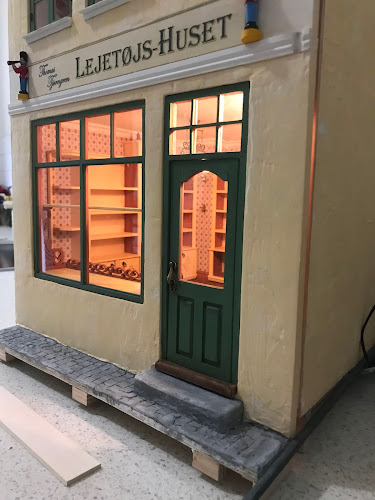 Next up was the front step and narrow cobblestone footpath. The step was pretty straight forward, made from a block of balsa, suitably sanded for wear in the middle. I had imagined that I could make the cobblestone from air-drying clay and glue it in place but as it turned out, it shrank too much and just wouldn't work. Instead, I opted for the same filler and glue mix I had used for the walls and then scored the lines between the stones before it was completely dry. This wouldn't work for perfectly even paving stones but for uneven cobblestone I think it does the job just fine.
I have since neatened the front of the footpath with a bit of timber, but I haven't decided yet if I will simply paint it or clad it with 'bricks' or 'stones'. 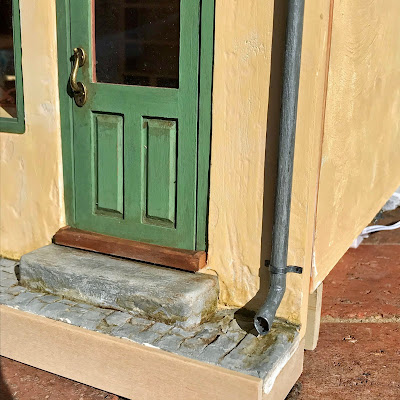 I had a fabulous time painting and aging the exterior and the cobblestone was especially good fun. I still want to add a bit of moss and perhaps a dandelion or a few tufts of grass growing in the cracks here and there.
The down pipe is made from a length of 6mm (1/4") balsa dowel. To make the spout, I wrapped the end with a bit of card. The brackets are also made from card with black marker dots for bolts (Thanks to Brae on Otterine's Miniature).
I also added card brackets to the ready-made gutter so it didn't look like it was 'just stuck' onto the wall. 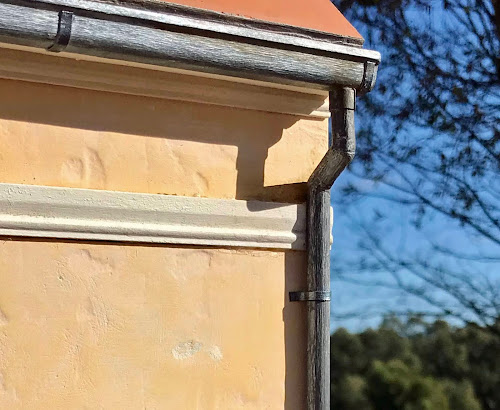 I was pretty pleased (and surprised) that I managed to cut the angles for the bends at the top of the downpipe correctly. The fact that it is the right distance from the wall to fit the gutter at the top is a complete 'fluke' - I was so focused on cutting the angles right that I forgot to measure it other than by just holding the piece against the wall. You have to be lucky sometimes.
And with that, the facade is pretty much done and my plywood boxes have become a house.
But there is still the 'almost finished' left. You would have noticed that the roof is just painted - for now. I am still working out what to do about tiles. I have been trying to make them, but that is a story for another day....
Have a lovely week everyone.
Anna X
at July 14, 2020 10 comments: 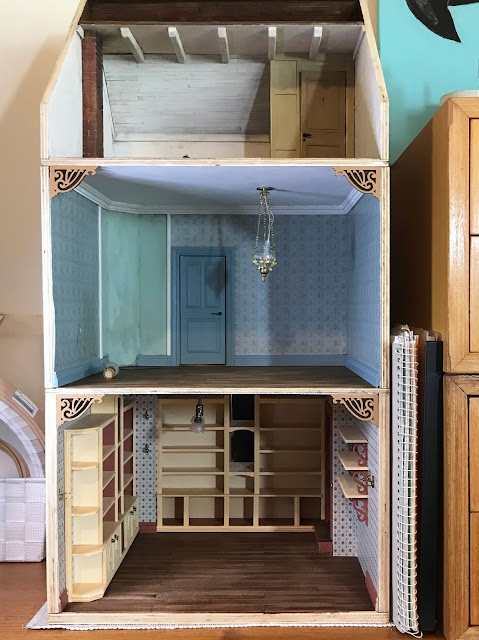 I stacked my three boxes and had a house.

There is still a bit of construction to do, before I can attach the front, but at least it is now all stuck together and is looking more like a house.

The apartment on the first floor has been almost like this for quite some time, but I wasn't able to attach the ceiling light until now, which is why I didn't share it earlier.
The other reason was that I was really unhappy with the stove I had. 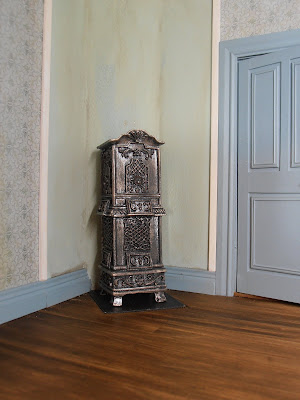 The resin stove was one of my early purchases and it was just too shiny and 'resin' looking. Besides, most Danish stoves were round (as I found out later). For my mini budget, this was not a cheap purchase, but he more I looked at it, the more wrong it looked and it was putting me completely off finishing it room. Until... 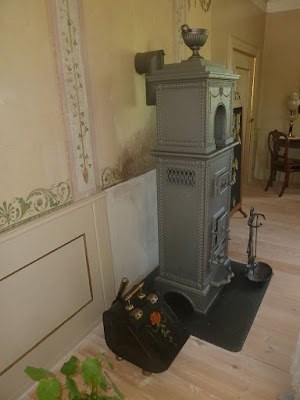 ... I came across this picture from Fjellerup Østergaard (I of course forgot to save the link to the page where I found it) and it made me think that I might be able to 'up-cycle' my little stove to something I felt more happy with. 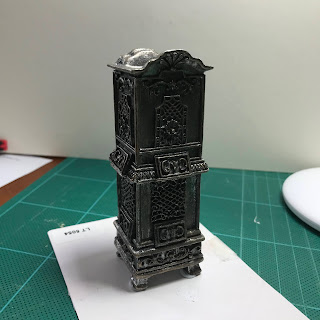 I liked the idea of a some kind of urn-looking decoration on top of the stove (a pot belly just didn't quite cut it). Without any exact plan for how I was going to make a 'cast-iron-urn' I pulled out a few different timber turnings and cut a few bits and pieces. 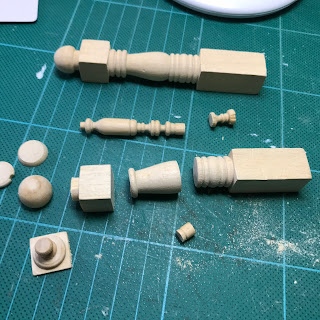 It was very much trail and error, stacking bits and pieces in different order, sanding, fitting, adding and taking away. It slowly started to take shape and once I added a couple of jewelry findings, I had something that with a bit of imagination could look like an urn. 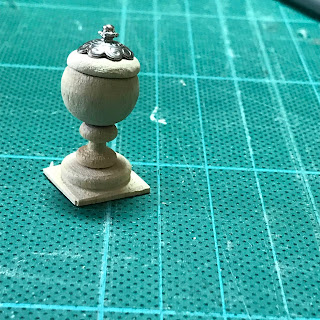 Testing it on top of the stove, I begun to think that perhaps this could work after all. 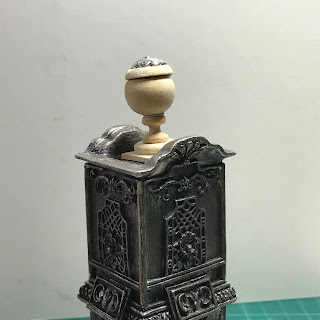 After a bit more sanding, to straighten it up, I have it a coat of gesso and then more sanding.
I then painted it with acrylic paint stippled on to avoid streaks but mostly to get that cast-iron look. I glued it on top of the stove and then gave the whole thing two coats of mat black mixed with a wee bit of white and a blob of silver. 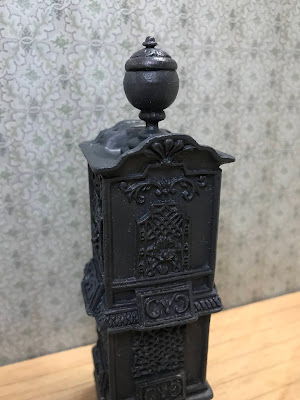 Once it was dry, I rubbed it down with very fine grain steel wool and felt so much happier with the look of my little square stove. 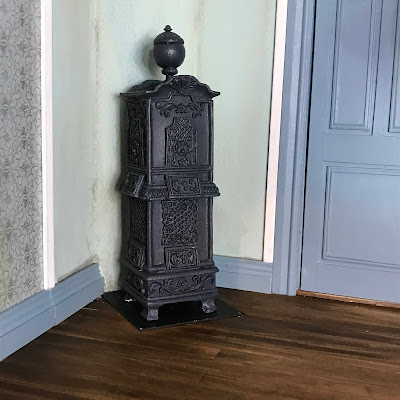 Seeing it in the room, it might be a little elaborate for such a little apartment room, but I still think the overall look is so much better. 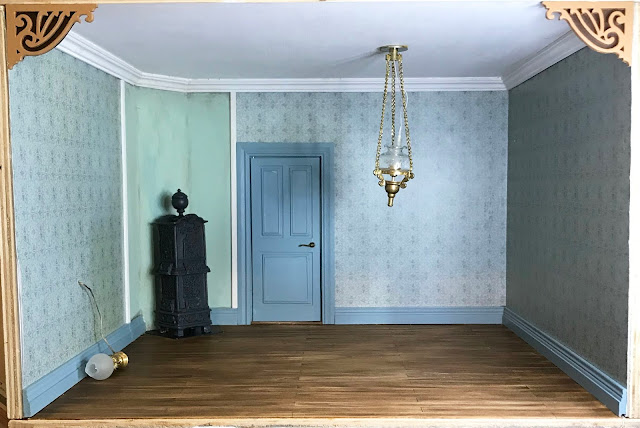 Truffle the dachshund is curious as to when he can move in... 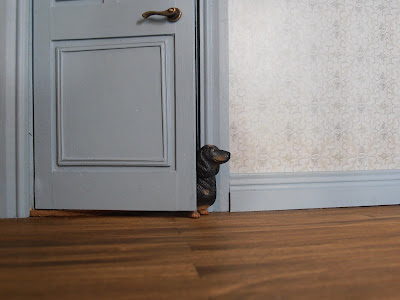 I sometimes find it hard to know when something is finished.. really finished.
But I do think that now that the the brackets I made to hide the spotlight and frame the front and the little light switch are in place....
The shop in The Toyhouse is finished... 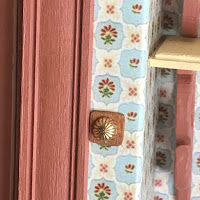 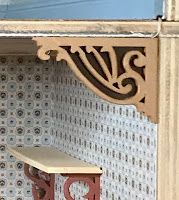 I am really quite happy with how the little switch looks on the wall, and the brackets too - although a bit of an afterthought worked out as I had hoped.
I still need to take a photo with the lights on - the spotlight makes such a difference. 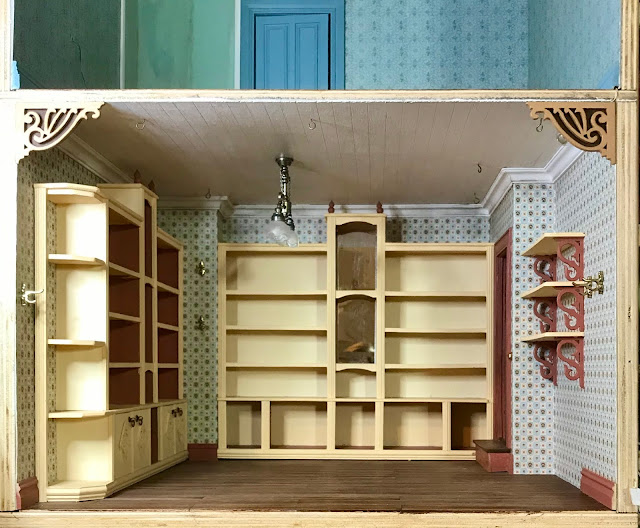 The apartment above the shop is also very close to finished... I think.
I, can't really show it yet, because I am building this house as three boxed stacked on top of one another, so the ceiling of the apartment is also the floor of the attic room.
I really, really, really want to finish the structure of this little house and I have done quite a bit of work on the attic room. 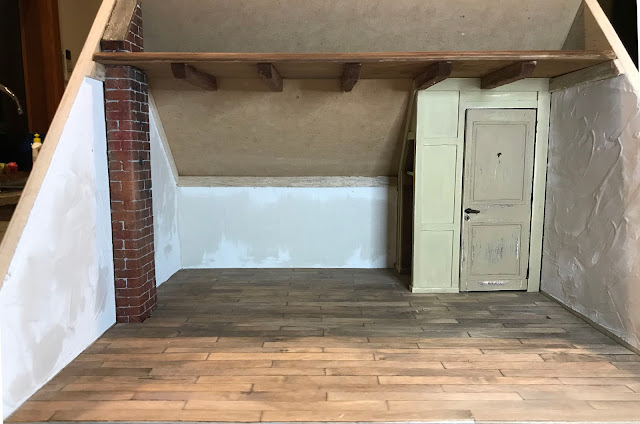 I have taken photos as I went along, but this is where it is at.
It is a plywood structure. The floor is made from pop-sickle sticks glued to card stock. I have tinted and stained it with several layers of paint and home-made 'stain' made from steel wool, coffee and tea left to soak in vinegar for quite a few weeks. It gives a wonderful dirty, weathered wood look that I wanted to the attic. 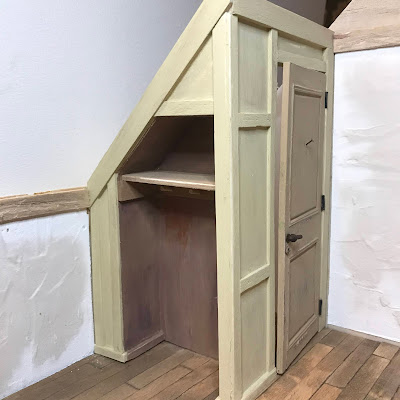 The partition, leading to an imaginary landing is made from card framed with strips of balsa wood.
smaller.  They are tricky to see in the picture, but under the shelf in the storage nook are three little peg-hooks so the resident student has somewhere to hang his Sunday best.

The door too is made from card stock and mini timber moldings. It does open, but is one sided so I am going to be leaving it closed. In the picture below, I had not yet put the hinges on. They are made following this brilliantly simple Hinge Tutorial. They are made from paper, that is glued tightly around a bit of wire. I mixed paint into pva glue to paint them to give them a bit of extra strength. 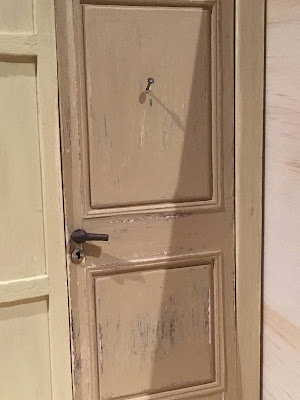 The keyhole is commercial week thing, but I simply could not find a door handle that was simple enough. Besides, I do know that most handles in more modest houses in Denmark were turned timber so....